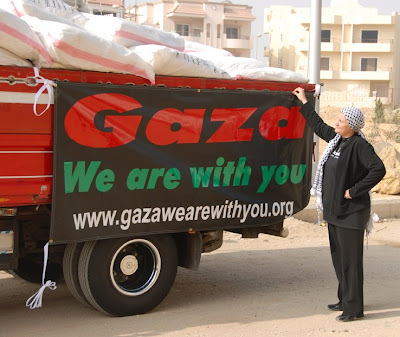 The Palestine Red Crescent Society helped us to coordinate a delivery of 140 tents and 280 blankets to the people of Gaza who lost their homes during the 22 day Israeli assault. The idea came about after having raised funds for medical supplies and equipment. We were told by sources on the ground in Gaza that there was a desperate need for tents that was not being fulfilled, so it seemed like a project that we could make a direct impact with.

The amazing thing about the tent campaign was the support we received from the Houston community. After sending out an initial email to gauge people’s interest to sponsor a tent for $150, I had over 120 responses within 48 hours. It was touching how this soon became an international campaign, with people from Ireland and Holland looking to contribute to the cause.

Upon my arrival to Cairo, I met with Dr. Mai Aref, the head of the Palestinian Red Crescent Society (PRCS), to coordinate the logistics regarding the trucks, supplies and border protocol.

One thing worth noting is the contrasting sentiments of the Egyptian people and the Egyptian government with regard to the Gaza issue. From the moment I arrived in Cairo I have felt nothing but support on all levels ranging from the tent merchant who sold the tents to us at cost to the workers loading the trucks who refused to be paid to the inspectors at the check points who did everything possible to facilitate our safe passage. Their warmth and encouragement was truly a sign of the support of the Egyptian people.
Posted by sahartravel at 3:20 PM